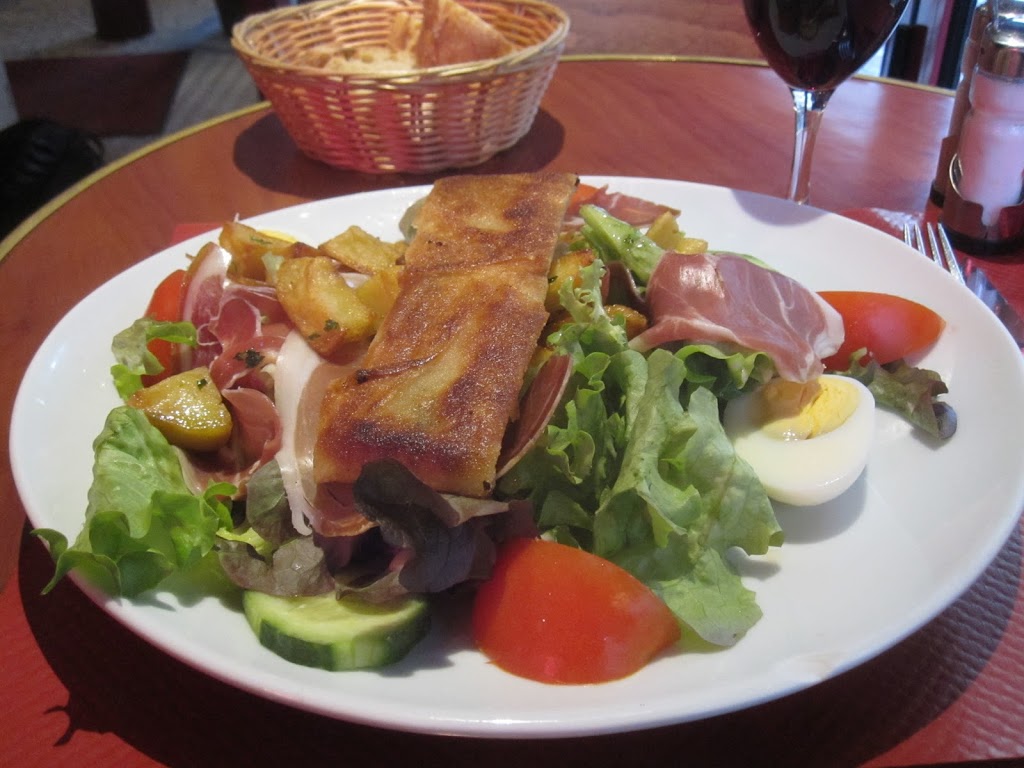 After sleeping the whole day, I couldn’t get sleep until 6 AM or something. When I was supposed to get up, well, I just got up this time. I can be surprising like that! It took a while to get things done, though, as I’m not the quickest person alive when I’m tired. I also decided to get my flight back home, as I still wanted to see things from not only trains’ windows, and the xmas is getting very close now. My final destination (uh!) will be London, where I’ll spend my time from Friday night to Monday morning.

All in all, I got outside around midday, and went straight towards the restaurant I wanted to eat tonight. I kind of knew it wouldn’t be open, yet, but I simply wanted to see where it is so that I’d find it later at the night. While looking for it, I went in another place to have my daily dose of salad with ham and eggs and fries, and wine, of course. The wine was in glass, you wise-asses. I really love the inventiveness of French kitchen. This wasn’t a Michelin star breakfast bar, but still the salad was very good, genuine, and tasty. After the compulsory espresso (decaf, WTF?), I went looking for that other place, and found it just round the corner. It was to open at 7 PM, and I wouldn’t even have been ready for it, yet, so I headed to my main destination, Louvre. 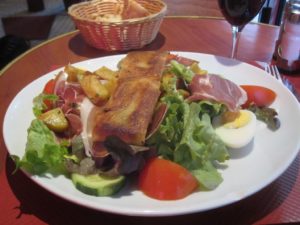 Louvre was somewhat bigger than the distant relative in my hometown in Finland. It was actually mad. After going through the renaissance era paintings and Roman sculptures, I had walked for kilometers in over an hour. Mona Lisa’s smile didn’t make me jizz in my pants, mostly due to the bullet-proof glass and the 5 meter security distance. Okay, I have to admit I’ve never really got the painting. The smile is kind of retarded to me. I saw enough of those smiles on the faces of the cerebral palsies at my youth center’s Thursday disco. I was playing pool, not dancing with them, you dick.

Still, Louvre is awesome. Just when you think of getting out, your eyes hit something that you still want to see. Like the Egypt section, which took me another hour to walk through. I spent about three hours walking around the building(s), and eventually decided to just get out before I collapse.

My next destination was Arc de Triomphe. Normally you would’ve taken a Métro there, but I wanted to see Champs-Élysées’ roads and avenues, and those booths selling glühwein, chestnuts, candies, pussy… no, not pussy, but everything that a normal tourist would grab. I just walked on and on, and on. I finally came to the arch, and it seemed like it was closed, as they were performing some kind of military “rituals” below it. Fortunately I was wrong, and I could get in by mere 9€. I’m being sarcastic here, as the wonders of Louvre cost me 9,50€, and now we’re talking about walking endless stairs up to a roof of… an arch. And that’s it. Well, the view was great, and even though my high anxiety was screaming for help, I felt good that I beat it and saw the whole rainy Paris there.

After the endless downward spiral of stairs, I decided it’s time to do the same with the Eiffel tower. The walk was shorter, but the rain kind of pissed me off. I’m the only one whole blame, though, as the weather was good yesterday, and I was sleeping. The tower was beautiful, especially as it was dark outside and the whole structure was blossoming with lights. My high anxiety jumped out of happiness when the LED screens announced that the tower was closed. Maybe the recent terrorist threats and my pumped-up backpack did it. 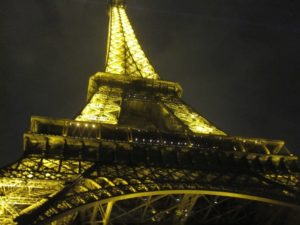 It was the time to finally get to my dinner destination, La Poule Au Pot. I got there a bit late, as I had hard times reading the map and finding a Métro stop (you know, I walk, but there’s a limit to it), but fortunately it wasn’t fully booked and I got in easily. The restaurant was recommended by my chef friend, Antti also, and it was worth the trip and more. The food was excellent, and as an added bonus, I learned that all the big stars, from Prince to Motörhead to Norah Jones to Rolling Stones (to me now) had eaten there. They had small plaques for everyone of those on the walls, and no, they didn’t ask if they can add my name there. Assholes. Anyway, the food was good, the waiters were polite but damn funny, and I had everything I wanted there plus more. A bit too much, actually, as I felt I’d fall asleep after the café and calvados. They told me I could stay there until 5 AM, but I politely asked for the check, paid the tip for the service, and got back via an even bigger rain and Métros to the hotel. 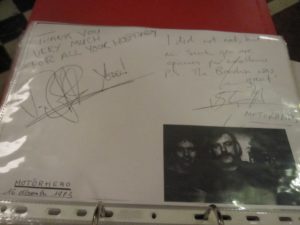