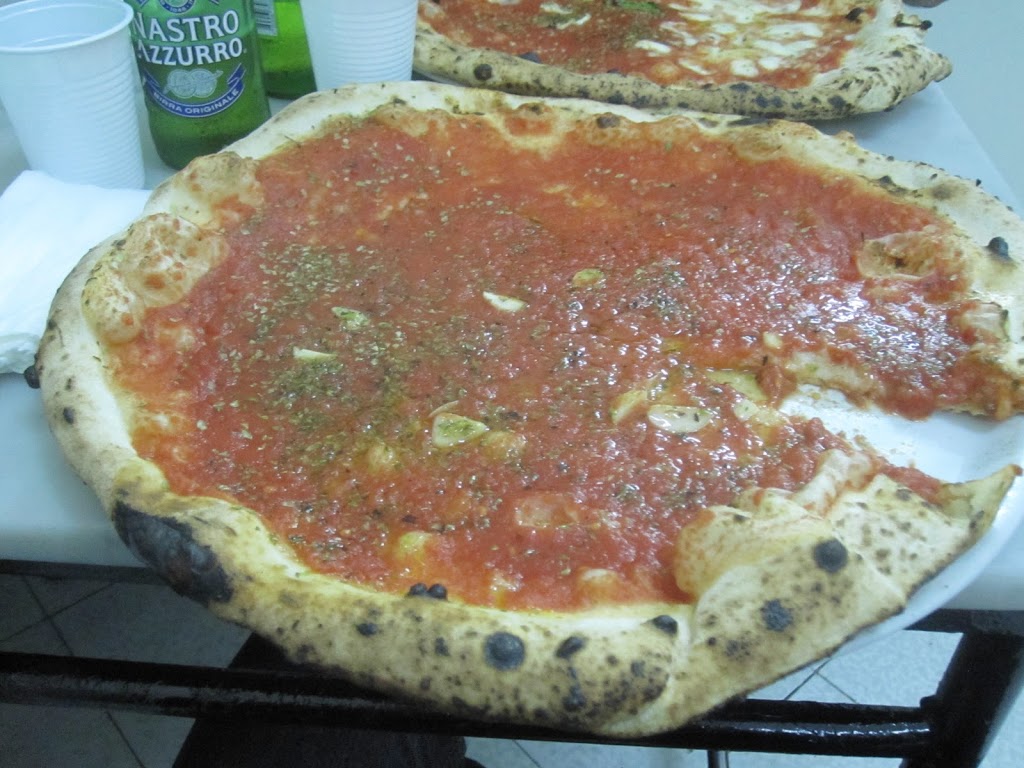 Judging by the looks of the streets of Napoli, they might have originally invented plague there, but definitely not the plaque. I arrived very early in the morning, and finding the hostel I had booked was very hard due to the sparse usage of street signs. Also, what you see on the map is not what it’s like in real world. With the help of the 3€ city map I got to the destination, eventually, and went to wait for my room to be free on the couch of the common room. After sleeping there for six hours (two hours too much, yeah), I went to the room to sleep more.

Once again, I missed the daytime completely. Then again, I came to Napoli to taste, not to see. I headed to the #1 pizzeria on my list of pizzerias to visit, Da Michele, and after waiting in queue for ten minutes, I got in to have my Pizza Marinara. And boy, it was as good as they had been selling it to me in guides! It’s amazing how much you can do with so little, if you just use pure ingredients and know what you’re doing. The place was also cheap, so I can definitely recommend it to everyone visiting Napoli or the areas nearby.

The next day plan was to see Pompeii, so I left my luggage at the station (as I had already reserved a room in Rome for three nights) and headed to train. When I stepped in, the helpful guy I had asked about the train, and some other men, skipped out and started running back towards the escalators. I didn’t know what happened, and a young fellow explained me something in Italian, which I took as if there was a ticket inspector and those men ran out of the train because of it. I showed my ticket and smiled, and only after the second time the guy had explained me the same thing, I understood what had happened. The pick-pockets had taken somebody’s wallet. Fortunately I pack all my stuff in the backpack, so it’s not as (easily) accessible as a back pocket of the jeans. On the 35 minute trip to Pompeii, two other local men warned me of pick-pockets, which made me take care of my backpack more seriously.

Pompeii was pile of rocks. Yes, that’s how the old, volcano-sunk towns are, but compared to things like Cambodia’s Angkor Wat with all those beautiful carvings, Pompeii was a bit of a disappointment. After visualising that it has been a vital Roman city, though, it all felt a lot more interesting, and especially when I read a description of the actual moment when the whole town was buried totally in volcanic ash within mere two hours, it felt like a good idea to go there and feel the history. Worth a two hour walk, yes, but for people equipped with imagination.

My #2 pizza destination was Brandi, so when I got back to Napoli, I headed that way, with only a vague idea of where it was. I tried finding it for an hour, and wandered on the narrow streets, actually enjoying seeing how people really live there. Eventually I got enough of walking and decided to check the location on the trusty computer that I had in the backpack. I had basically walked twice by. I went in at 6 PM, just to find that it would open up at 7:30 PM. My train was to leave at 8:30 PM, but I still thought of giving it a shot as I might nevehttp://www.damichele.net/r be back to the city, and went to another bar to drink a couple of beers and a whisky for appetizers.

Brandi was a disappointment. I took Pizza Margherita, and it was closer to those frozen ones that the ones you should get in a proper (and restaurant-priced) pizzeria. Something must have changed with the place. Well, at least I tried. The guy playing guitar (and fairly badly) just in front of me while I was eating didn’t help a thing. After quickly paying for the pizza, I started jogging towards the train, and on the way I found out it was impossible to get there in time. Nice shit. I basically gave up and just walked to the station, to find out that the train was leaving 10 minutes late. I rushed to fetch my luggage and got in it, after all! I even got a train compartment for myself alone.

Good bye, you thrash bag filled streets of Napoli. It was pretty nice knowing you, but I’m off to Rome.